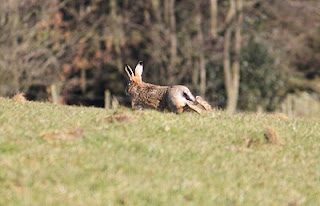 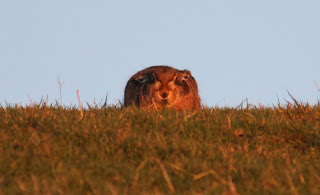 Myxomatosis is a vile disease and one which almost wiped out the rabbit population in the UK a few decades ago. It's still possible to see an affected rabbit, and it's an unpleasant sight seeing an animal suffering in such a way.

On a couple of recent occasions, we've seen what
we initially thought were hares, and then got closer, thinking that in fact they were rabbits with myxomatosis, pulling back in mild horror and then realising once they ran off that they were actually hares after all.

The photos shown have caused a little bit of debate - I can assure you that no rabbits appear in this post! Both the hares shown lying down got up and ran, revealing that they were definitely Lepus Europaeus. You can just about see the yellow eyes in the two hares lying down.

Just for the record, hares are thankfully unaffected by myxomatosis. 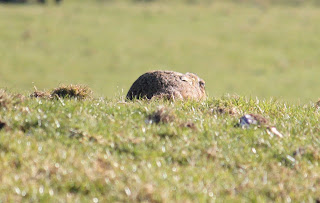 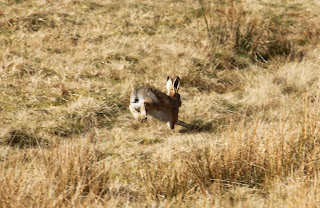 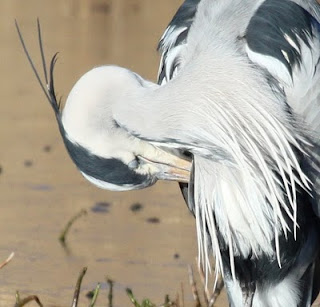 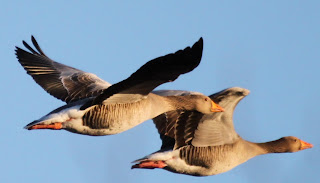 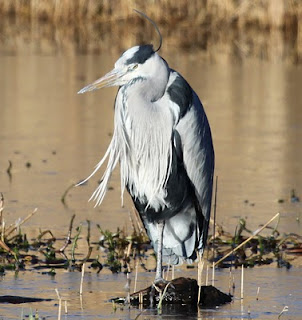 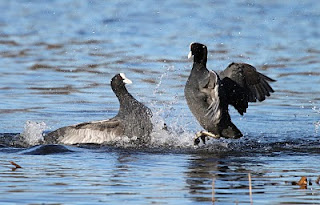 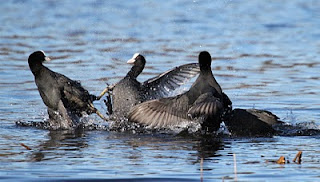 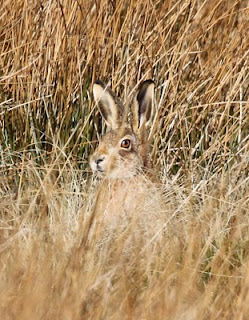 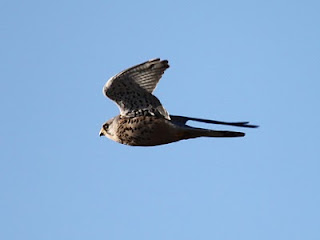 Up early and it was a stunning day o we thought we'd head over to Leighton Moss via the moors. We had a cracking opp to catch two hares running along the road. Unfortunately our car windows are bust and Pants valiantly attempted to shot them (with a lens you understand) through the windscreen but the results were disappointing. We leapt out living doors open etc... (starsky and hutch style wildlife watching) managed a couple of shots though the hares were hiding in the grass (they are so well camoflaged in there)


Got to Leighton Moss and it was almost warm in the sun, no wind and fab lighting. Sadly nothing much was happening though we had some great opportunities to photograph a rather grumpy heron. Really good day out though.


Hope you enjoy these pictures... sure Pants will post some of his best too soon.
Posted by Simon and Jo at 11:30 1 comment: 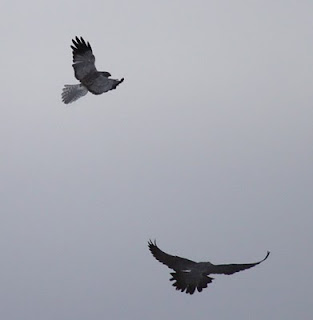 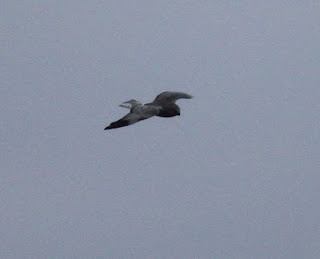 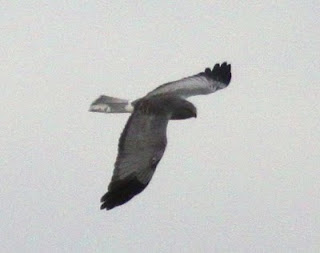 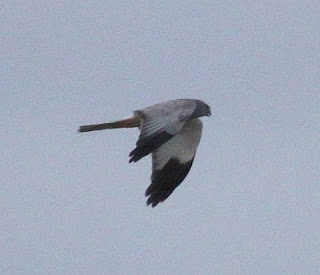 Talk about a bad day in the office. Yesterday I got a kick in the guts- not going in to it here. Anyways... decided to clear my head and go wild. Pants was out so I hopped in the car packed my new super lens and bethought me a safari over Barn Owl Hill and over to top of Harrier Walk.

The Barn Owl was nowhere to be seen but I hadn't expected it really. Drove over the top and stopped the car in our usual spot. I spent two hours up there clearing my head and trying to forget the hurts of life by concentrating all my thoughts on the cold wind and stunning scenary. Was about to give up when I saw the Male Hen Harrier- fired off a few shots but he was just too far away and being hassled by crows. Went for a walk down the lane to see if I could see him on the other side of the wood- nada. Walked back up the hill and thought I'll have a smoke by the gate and ...lo and behold there he was again. He was being mobbed this time by what I THINK was a buzzard (at first I thought I was seeing him with the female but she has a distinctive white rump- my pictures aren't very clear but I think this was actually a buzzard) As I've said before it's a raptor hot spot up there.

Look who's coming to dinner... 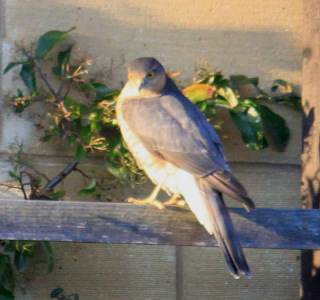 After a day getting some decent landscape photos but with precious little wildlife to be seen, we parked up the car feeling a twinge of dissappointment. No sooner had we stepped out of the car than a robin flew out of some nearby bushes at such a speed and unusual flight pattern that it looked like it had been picked up and kicked out.

The reason for its sudden flight soon became clear as a raptor followed it out of the bushed and landed on some wooden trellacing. I managed to fire off a few shots before it flew off and our suspicions about its identity were confirmed - it was a male sparrowhawk! The robin had had a very lucky escape, and we had a very fortunate view of this fairly common but very secretive bird.

We walked over to the bird feeders, which were eerily quiet and noticed a fluffy little ball of feathers stuck to a nut feeder. It didn't move, and we both thought it had killed a long-tailed tit. On closer inspection, it was actually alive, but absolutely terrified (with good reason) and trying its utmost not to move a muscle. I took the photograph below and then moved away, then
suddenly all the long-tailed tits came out of their hiding places and converged on a nearby tree, chattering madly about the close call they had just had. 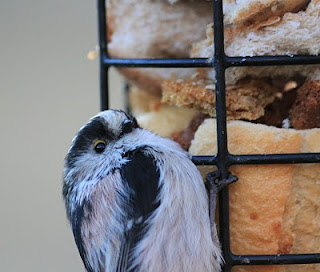 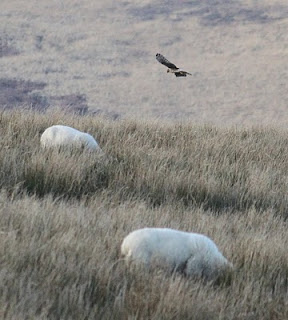 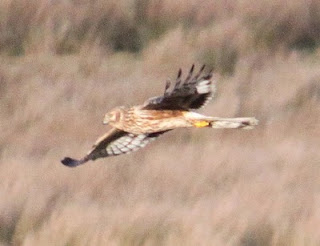 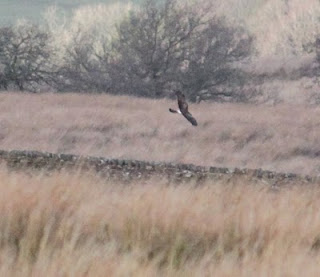 Good day out again yesterday. Weather looked a bit suspect but turned out great. Saw a white stoat and experienced some frustration trying to snap him from car window- impossible to focus as he ran along the hedge and eventually disappeared down a hole. The view of him was fantastic it was just too difficult to folow his bouncy movements in between roots in and out of camera focus.

Later we saw the male harrier again and trudged up over some boggy moorland for a closer view and of course lost sight of him before the top.

Then to our enormous pleasure we saw a female Hen Harrier quartering the grassy moorland on opposite side of the lane and followed her progress all the way down the hill and then all the way back up (v. tiring trying to run back up the steep lane, bobbing our heads over the wall to check her progress) Again frustrating photographic experience as the wall was high and at one crucial point where she came close, she was just too near the top of the wall which kept picking up as the main focus leaving the bird blurred. Grrr. Still once again the pics clearly show her for what she is.

Very excited to see both male and female up there and hope that come spring we'll get some sky dancing from these beautiful birds.

Enjoy the pictures (for what they are!)
Posted by Simon and Jo at 23:41 No comments:

Climbing up on Barn Owl Hill 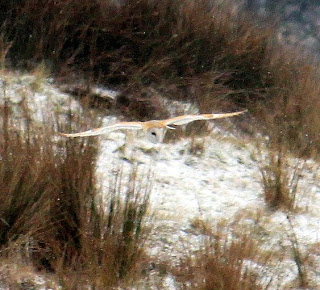 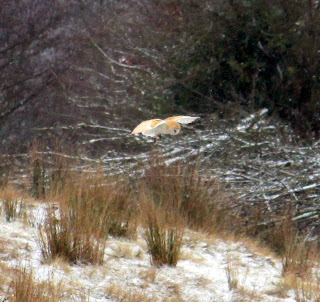 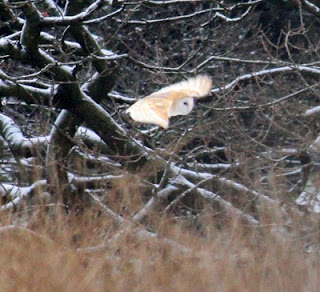 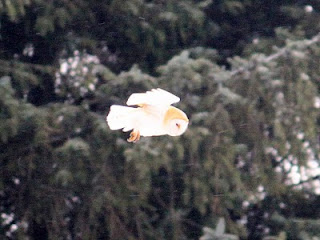 So this is basically to post our walks and wildlife spots over the year.

On Monday we drove over the lane that takes us to the point on a half term walk where we spotted our first hen harrier (which then gave that walk the name Harrier Walk) On the lane further along from the walk bit we watched and photographed a barn owl hunting. So today, being our day off, we decided to walk up the lane from the other side and if we saw an owl again we decided the hill would earn the prestige of being named Barn Owl Hill.

Lo and behold despite the snow and the cold ... there she were- hunting low over the field. We took some snaps (though it was poor light and the snow was almost horizontal) The barnster then swooped off down the lane ahead of us and we gave up thoughts of seeing her again. Having nearly slipped over several times on the way down we suddenly noticed her sitting on a post about 40 feet ahead trying to look nonchalant under the cover of some branches. She noticed us and we saw her crouch and take off over the field. Managed a few more snaps of her hunting before she glided off behind a stand of pine.

What a beautiful bird and in the snow especially silent and ghostly.

Hope you'll continue to pop by and enjoy this blog.
Posted by Simon and Jo at 08:46 No comments: