So we are nearing the end of another long year and a large number are fledging.... that is a large number of children leaving for university and life beyond this fine old place.   An annual event that's happened for 100s of years. Another wonderful annual event that has also been going on for centuries is the fledging of all those little creatures which live amongst the towers, gargoyles, grounds here.

Especially our favourite, the kestrel..   Gerard Manley Hopkins was here as a teacher for a time and wrote a magical poem called "Windhover" about a kestrel.  Perhaps the ancestors of our inspired him.

We are delighted that for past 5 years (to our knowledge- but probably for as long as the building has been here) a pair have nested behind one of four griffins,  each holding a shield and each above a letter A. M. D. G. - Ad maiorem Dei gloriam - For the greater glory of God!   If you happened to be educated in a Jesuit School anywhere in the world you would know this and probably wrote AMDG at the head of every piece of work you did.   Anyway this year's pair of falcons decided D was the main event (and who can argue that?- well- Christopher Hitchens perhaps and  of course Richard Dawkins but he is a real bore -so whatever...)

For past couple of months we have been thrilled by the shrieks of our amorous pair as the male has been bringing female titbits of the small mammal variety.  Then she was clearly set up on the eggs, safe in alcove behind D.  This is right outside the window of my office - unfortunately too high up to peer out (but that makes the site even more suitable and private and safe)

Yesterday I heard the distinctive sound of young nestrels!  (new word!)  When out with kids later heading to a BBQ I looked up and was delighted to see not one but two fluffy falconettes peering down at the goings on.

We also have jackdaws, magpies, starlings, house martins, swallows, blue tits all nesting in cracks, crannies and shelves on the building.   So living in a second floor apartment we get allsorts at our window feeder and on stone mantle outside window.  This year we've had chaffs, great and blue tits and pied wags using the feeder as well as many crows, jack doors, starling etc using mantle. 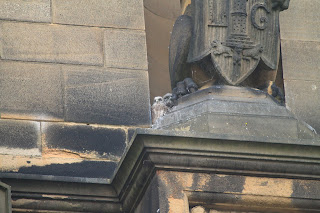 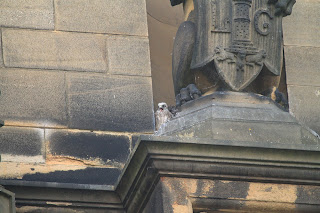 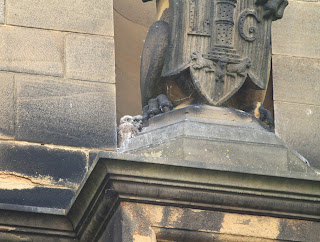