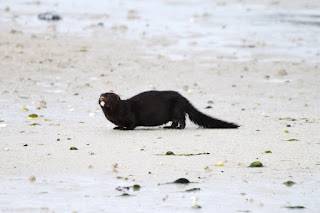 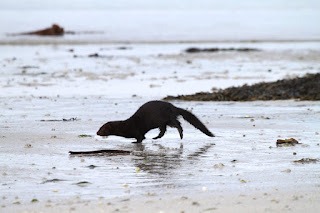 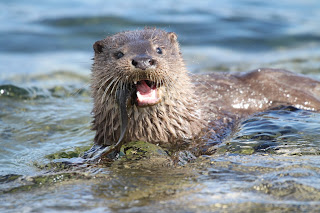 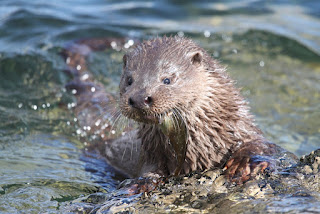 Just back from a fantastic 2.5 weeks in Scotland. We took a week and half at Fionnphort, Ross of Mull in the tent and a further week at our beloved Applecross in Wester Ross.

Firstly, if thinking of camping on Mull- definitely check out Fidden Farm campsite at Fionnphort (near to the ferry for Iona) What a fab place- and if the weather is poor it generally appears to clear up in the evenings (though it's windy so bring extra tough pegs)

Ferry to Iona is 1.25 miles away down the lane with possibility of seeing seals, otters, mountain hares and hen harriers en route. Cost of a return to Iona is £4.80 and lasts 10 minutes.

We saw three hen harriers, loads of seals and mountain hares and a mink one morning ran out of the sand dunes and leisurely made its was across the beach (with us following and snapping away and many a surprised early morning camper calling OTTER! So notter otter! Check out the pictures!)

Our new pup Kyra thought she'd died and gone to heaven after a long car journey from Cerridigion to Lancashire and then another to Mull. She loved running wild through the heather, bracken and rough grass (saw 5 voles on account of her innate flushing abilities)

Had some wonderful days seeing stuff we weren't expecting like: short eared owls and once a stoat still half in ermine with a vole in its mouth.

Also otters, otters and otters. First a lone otter silhouetted on a rock as we drove past (the only otter seen but never photographed, even badly) Then three spotted from the car by Pants and we rushed down the slippery seaweed-bound rocks of the shore in time for P to get some really close up shots through awful weather of mum and two cubs rolling about in seaweed play fighting. Time I arrived mum was swimming around grunting at us... we took her warning and withdrew to give them some peace.

Then we stopped in a lay by and realised a number of people had seen an otter hunting off the shore and were busy snapping away (the first otter we have photographed not originally spotted by us) After the other snappers left the otter came to shore and we grabbed a few shots of it eating a crab.

Some time later in the week we went back to the same loch and as we walked the dog along the cost I suddenly saw an otter run out in front of me and into the sea. Photographed it hunting for a while and then went back to fetch the car and get the dog some water. Drove back and the otter was still out there but came in slightly and ate an eel on a recently emerged rock right in front of us.

Then on the way back to the campsite we stopped on a whim opposite the Craignure Inn, ostensibly to give the dog a stretch and a drink. Couldn't belive my eyes when what I had thought to be some seaweed washing up near the slip way turned out to be a very unsteady cub rootling about in weed at the edge for crabs. Fired a number of shots in great light before losing sight. Then saw otter swimming away around the pier. Pants and Kyra headed up the pier and started to snap away. While I fired off a few shots of the otter I was startled by realising that their otter wasn't the cub. The cub was right in front of me (about 6-8feet from my feet)

It disappeared around the edge of some rocks and I squatted down and snuck further along the slip way when suddenly it was there, back turned to me eating a fish. I started to photograph it when it jumped around startled by my presence. It was only a small cub and obviously did a swift risk assesment determining that losing the fish was the worst of two evils & so facing me it gobbled away and I got 29 pictures at very close quaters in perfect light. Unbelievable luck after all these years sitting in rock pools being battered by hail attempting to photo otters 40-80 feet off.

We were totally delighted with 8 otters on Mull.

Applecross is another story!!

Wll unpate in few days with APPLECROSS bit- meanwhile please enjoy the snaps here and we may add more in their own post. Please do not use these pictures without permission.
Posted by Simon and Jo at 11:22 1 comment: